Eeeeeee! It's less than 2 weeks until the premiereeeeeeeeeeeee! And we now have the synopsis for episode 2!
WEEEEEEEEEEEEEEEEEEEEEEEEEEEEEE!
HERE YOU GO! SPOILERY SPOILERS!
“Reichenbach” – (9:00-10:00 p.m. ET)
CROWLEY TELLS DEAN THE MARK NEEDS TO BE FED — Crowley (Mark Sheppard) notices Dean (Jensen Ackles) is becoming more and more aggressive. Dean tells him that’s the side effect of being a demon, but Crowley knows it’s something more - the Mark of Cain needs to be fed. Meanwhile, Sam (Jared Padalecki) is captured by Cole (guest star Travis Aaron Wade), an angry man who blames Dean for his father’s death years ago and wants revenge. Cole tortures Sam, hoping he’ll tell him where Dean is hiding. Hannah (guest star Erica Carroll) sees how weak Castiel (Misha Collins) is becoming as his grace continues to fade, so she makes a bold choice and asks Metatron (guest star Curtis Armstrong) for help. Thomas J. Wright directed the episode written by Andrew Dabb (#1003). Original airdate 10/14/2014.
Great team! Thomas J. Wright and Andrew Dabb! (Remember it's 1003 because it was filmed 3rd.)
So the shots of Sam being tortured by Cole are from episode 2. Good to know. Also good to know why the guy is after Dean. (BACK OFF!) Is this something else that Dean carries guilt for? Or is Cole just an asshat! (I've vote for the later!) 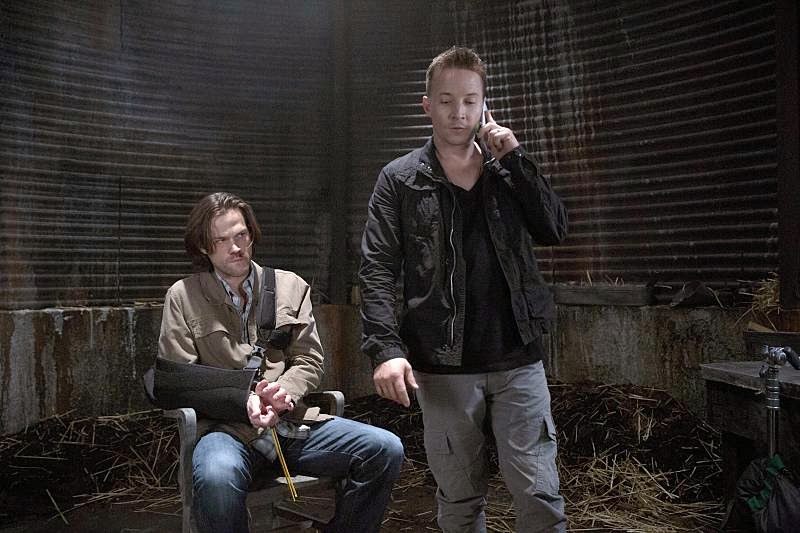 And METATRON! I can't say I'm not happy! I think Curtis Armstrong is great (so happy he's coming to cons now. I'll see him in Vegas!), and though I HATE HIM WITH THE FURY OF A THOUSAND FIERY SUNS FOR KILLING MY BOY, I did enjoy Metatron throughout the season. BUT I'LL ALSO ENJOY HIS EXPLODING IN A BURST OF LIGHT DEATH!

And THE MARK NEEDS FEEDING. Feeding with what I ask? *waggles eyebrows* *thinks of a certain scene*

Tell me what you think?

Add your squee below!
-sweetondean